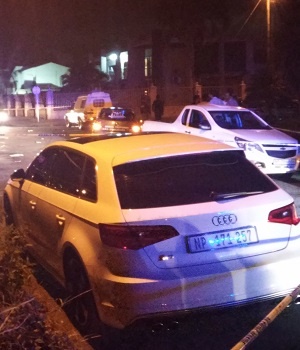 ONE of Pietermaritzburg’s best known crime fighters was nursing a gunshot wound to the cheek last night after a dramatic confrontation with a gang of heavily armed robbers.

Shaheen Sulieman, of Magma Security, responded to an armed robbery with friend and Combined Action Task team (CAT) colleague Shameel Ally at a home in Mountain Rise Drive, in the affluent suburb of the same name, at about 7:30pm.

On their arrival at the scene, the two men were confronted with gunfire by men wielding AK47 assault rifles, the shots of which were heard at the office of The Witness. A round grazed Sulieman’s cheek.

Sources at the scene said a home owner, who is also thought to be a prominent Pietermaritzburg businessman, was robbed at gunpoint by ten men armed with AK47 assault rifles.

It is thought that the man had been followed home and had just entered his yard when the men approached in two vehicles, an SUV and a Mercedes.

The men assaulted the owner using the butts of their rifles, demanding an undisclosed amount of cash that was in his possession.

Witnessing the commotion from a window, the victim’s son pressed the panic button, alerting Magma Security officials, who are in charge of protecting that area.

Sulieman and Ally, director of Ilanga Security, were the first on the scene as the robbery was still in progress.

Upon their arrival, the ten men opened fire.

Sulieman and Ally returned fire, but ran out of bullets as the robbers continued their hail of bullets.

Soon after, more security guards arrived as back-up, but they too were sent hurtling into nearby yards and bushes, taking cover from the spray of bullets.

The robbers managed to escape with the cash and the home owner’s hired vehicle, leaving behind a street littered with bullet shells.

When The Witness arrived at the scene, a police perimeter of a 100-metre radius was set up, with crowds of residents huddling together around the yellow tape.

One resident, who asked not to be named, said he was studying in his room when he heard the gunshots.

“It was like jumping jacks (fireworks) going off, only louder. I jumped off my bed and headed straight towards my parents’ bedroom to see if they were alright. We waited there until it was all over,” the resident said.

Another resident said she saw a Magma Security official hiding behind her wall. Speaking to The Witness later, Sulieman and Ally said they were both glad to be alive.

Sulieman has been involved in a number of high-profile cases. In October last year he was hired by the family of Bafana Bafana captain Senzo Miya to probe the soccer star’s murder in Vosloorus