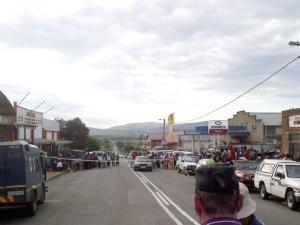 Durban – Four people, including a policeman and a security guard, were killed and at least five people were wounded when armed robbers opened fire with AK-47s in a foiled cash-in-transit heist in Richmond on Monday.

The shootout started at 5pm and the drama ended just before midnight, and included an ambush on a pursuing police van. The death toll could be higher, according to Magma Security owner Shaheen Suleiman, who said six people had died. Police said that Sergeant Themba Zondi, a G4S security guard and two robbers had died. Suleiman said another robber had died and a bystander was believed to have died this morning.

The robbery took place less than 130m from Richmond Police Station. Among the robbers killed was one of KZN’s most wanted men. Suleiman said he belonged to the “Boiling Water Gang” and had been on the run from police for months. The gang is known to attack their victims with boiling water. Two robbers are on the run while two others are fighting for their lives in hospital. A policeman was also in critical condition.

Suleiman said the robbers had arrived in two cars at Capitec Bank in Shepstone Street at 5pm. They confronted a G4S guard and shot him in the neck. He died at the scene. The suspects fled in a RunX, leaving a bakkie behind.

A police source said the robbers made off with two money boxes. “The robbers were pursued by four police officers in a van, Suleiman said. The gang had a back-up team armed with heavy calibre (guns) waiting around the corner. As the police came around the bend the robbers shot at them.” Zondi was shot dead and his colleague was seriously injured, Suleiman said. Zondi and his team had been transporting prisoners and had stopped to help Richmond police chase the gang of robbers.

Suleiman said two suspects ran into the bushes. One was shot dead and the other got away. “The other five suspects got into a bakkie and sped off with police in pursuit.” Suleiman said a number of units – including the SAPS Public Order Policing, Tactical Response Team, dog units and private security companies – blocked off the road, preventing the suspects from driving any further. “Four of them jumped off the bakkie and ran into the bush. One of them was shot dead. Police surrounded the bush and there was more gunfire. Another suspect was shot dead, two were arrested and one got away.”

Police spokesman, Captain Thulani Zwane, said police could not provide more information as they were still combing the scene on Tuesday morning. Richmond mayor Andrew Ragavaloo described the scene as “chaotic”, with half of Shepstone Street cordoned off. Locals had to dive for cover during the exchange of gunfire. Ragavaloo said that the atmosphere in the town was one of shock and terror: “It’s horrible. The street is covered in bullet casings and blood. People are still crying. It’s just terrible.”

A police source said several bystanders had also been injured in the shootout, which ended just before midnight. Two AK-47s and the cash boxes were recovered. A Toyota Corolla and a bakkie believed to have been used by the robbers was also recovered.

The source said the robbers appeared to be well trained. “These are not your average criminals… The weapons they carried are an indication of this. They planned this well in advance and probably knew when the truck would be arriving,” he said.

Another police source said that three pedestrians who were shot were in a stable condition in hospital. – Additional reporting by Tankiso Makhetha