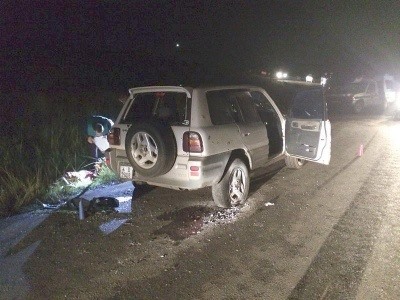 ALLEGED plans to once again target the Richmond Capitec Bank were coincidentally foiled when the heavily armed robbers realised there were police officers inside the bank on Monday. The robbers then turned on a soft target — a furniture shop — nearby, little knowing that soon after, two of the gang would be dead following a deadly shoot-out with police and security staff.
This is according to the director of Magma Security and Investigation, Shaheen Suleiman, who was involved in the 10-minute gunbattle between the robbers and members of the Hilton Flying Squad and the Pietermaritzburg K9 Unit. One alleged robber was injured in the shoot-out, three were arrested and police are hot on the heels of two or more suspects who are still at large.
The gunmen had robbed the Bizakahle Furniture Store belonging to Khalid Malik, a Pakistani national, at around 4.45pm.
Suleiman said he was called to the scene when members of his security company requested back-up after being shot at by the suspects. “My guys were doing their regular patrol along Chilley Street in Richmond when they saw seven suspects running down the street. They chased them and the suspects retaliated by opening fire,” he said.

Suleiman said his men called for back-up and with the Flying Squad and K9 Unit, helped search for the alleged robbers who had run into some bushes. “When we could not find them we received information that they were using a Rav4 SUV to get away and we were onto them in no time and they started opening fire at us,” he said.Suleiman said the gunmen used their guns “like professionals”. With the two suspects dead, this brings the number of people who have died in crime-related incidents in Richmond The Witness has reported on in the past two months to eight. This includes a security guard, police officer and a woman who were killed in late Jan­uary during a robbery and three members of a Richmond farming family who were killed two weeks ago.

Bizakahle Furniture Store owner Khalid Malik said businesspeople in Richmond now lived in fear of who was going to be hit next and said robberies were a weekly occurrence. “We don’t know whether this was a deliberate target on Pakistani-owned businesses because on March 2, another Pakistani-owned business was also hit,” he said. A shaken Malik said he was robbed while he was serving a female customer and as he was about to give her the change, seven armed men entered the store. “Five went inside the store and two stood outside as a look-out while their friends took R22000 and R4500 worth of airtime,” he said.
Malik said they tried to get away using his bakkie but when it did not start they fled on foot. “I have been doing business here for 11 years but we are scared,” he said.
Richmond Mayor Andrew Ragavaloo said they believed Richmond was seen as a soft spot by criminals because of its past history of violence. He commended the SAPS and Magma Security for sending a clear message that criminals must stay out of the area because they will be arrested. “We would like police to cordon off and search the identified hotspots in Richmond to recover illegal firearms and ammunition,” he said. KwaZulu-Natal Community Safety and Liaison spokesperson, Sipho Khumalo said MEC Willies Mchunu condemned the frequent robbery incidents in Richmond. Khumalo said the MEC has been involved in meetings with both police and political leadership of the area to find solutions. He said they were focusing on mobilising the community to form a partnership to work with the police against criminality. “We also want to beef up police and sharpen detectives’ skills in the area,” he said.

Provincial police spokesperson, Captain Thulani Zwane said the injured suspect was treated by paramedics and detained at Richmond police station.“Three other suspects who did not sustain any injuries were arrested at the scene. Two firearms were recovered at the scene,” said Zwane. He said the suspects’ vehicles, a Toyota Rav 4 with a Lesotho registration and a BMW, were impounded. He said four suspects were arrested and will shortly appear in court on charges of business robbery.